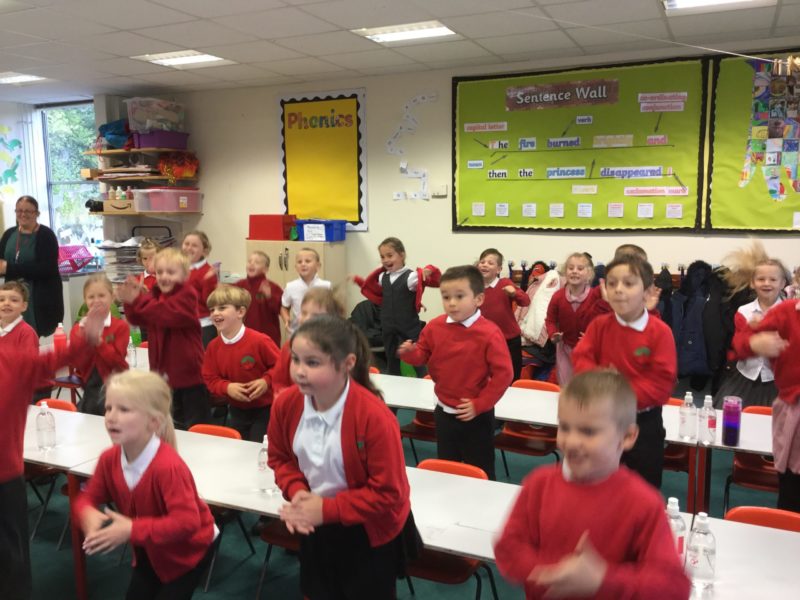 This week , we have been working hard in our English lessons. We have been pretending that we were Paleontologists, digging up dinosaur bones. George really liked doing the diary. Harper said it was good because he likes writing.

On Tuesday, we made dinosaur fossils using clay. Dolly-May said “We had a dinosaur toy which we put on a piece of clay, took it off and waited for it to dry and it looked like a real fossil. We also learnt how real fossils are made.

On Wednesday, we wore chicken, turkey, duck and swan masks. We all took part in a play called “Chicken Licken”. It was shown to the whole via zoom during our Harvest assembly. Bryan said he liked doing the story on the camera. Everyone remembered their lines and performed really well. Mrs Pearson said “It was wonderful!”

On Thursday, we were playing handball during our PE lesson with Craig and Brooklyn. We were trying to put balls in a goal using our hands. You were only allowed to move three spaces and hold the ball for no more than five seconds. Jack and Eva said it was really fun.

Today is Friday, we are really looking forward to Street Dance with Gemma and there is a surprise this afternoon. It says so on our visual timetable. We don’t know what it is. We also don’t know who will be STAR OF THE WEEK or AWESOME AUTHOR. Come back next week to see who won.